Recently I am trying to integrate flowdroid into my static android application vulnerabilities scanner which is written in python with androguard used to enhance its ability of vul detection.

At first I tried JPype, it works well in my own machine and docker image, but it can not be used with k8s now because the pip package celery use fork to create child process which will hang JPype, for details can check out here. And after seek for how to change celery from using fork to spawn. I got that currently celery does not support that option from here due to the version of celery my teammate used.

So finally I decide to let flowdroid runs in a single process as a server, and exposes some interface for remote to communicate with. We all know that there are many methods, but here I will try to use gRPC cause I’ve never tried it so I think I need to have a try. Also finally it works well. Here I will share you some details about how I do it.

Another reason that I wrote this is that to docs in gRPC’s official site is a little confusing for me, I think there will be other guys have the same feel as me, so I wrote my experience here as notes and hope can help others who are in panic.

For my project I need two interfaces, one for init flowdroid with specified APK file, one for run my wrappers with extra data that I gather from androguard. So my protobuf format like below:

With a pom which contains below contents:

Then build it with jars your project will need. It will generate the RPC_Related code. 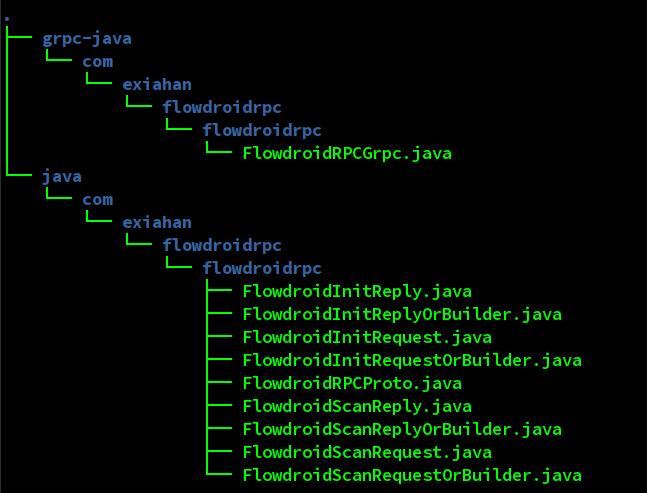 Then implement the ImplBase class as the official tutorial says.

Then use maven to build it again, we will get an jar that can be run via:

Python is a little like java. Here we use below shell command to generate codes.

The FlowdroidRPC.py is the wrapper written by me and the other two py file that end with pb2_grpc.py is generated file.

The wrapper is very easy. As below shows:

Now all the python and java part is done. Enjoy it.